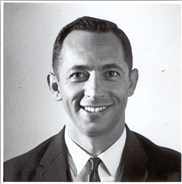 TEHERAN, Iran, June 2, 1973 -- A terrorist shot and killed an adviser to the United States military mission on the morning of 2 Jun 1973 as he was walking from his house to a street corner to be picked up by his driver, the American Embassy announced.

The victim was LTC Lewis Hawkins, 42, of Plymouth, Ind., 23 miles south of South Bend. He had served in Iran since July, 1972. Iran government officials said the terrorist shot Hawkins two or three times in the head and fled on a motorcycle driven by another man.  His wife, Annette, rushed to the scene, but it was too late to save Lew.

Joe Danieli and Dave Mikkelson recognized that Lew worked with and/or supported most of the FC Basic and Advanced Course officers who went through the Finance school during his tenure. Therefore, they felt it would be most proper to create an award as a tribute to his extensive service at the Finance School. They immediately began a collaboration that would culminate in the establishment, by the Indiana chapter of the ASMC, of the LTC Lewis L. Hawkins Memorial Award.  The award is presented to the outstanding graduate of the U.S. Army Finance Captains’ Career Course, as selected by their peers and the course director. This officer will have demonstrated the highest caliber of professionalism, leadership, devotion to duty, and selfless service, which were the standards of LTC Lewis L. Hawkins.

After Lew’s assassination, Lew’s widow, Annette, returned to Indianapolis and Fort Ben Harrison, and has remained in the area ever since.  She stayed a single widow for several years until marrying LTC John Martin, a retired AG officer (now deceased), who became the only AG officer to be a member of RAFINO.

For the past 40+ years Annette, has faithfully been a guest at FOAC graduations to present the ASMC Lew Hawkins Memorial Award to a distinguished FOAC graduate; including the trip to Fort Jackson for the past several years (lately accompanied by Sharon Hall).

Dave Mikkelson learned, recently, that, after so many years and so many trips, Annette would no longer be able to attend these graduations.  While it is certainly understandable, it is a melancholy milestone in the history of the Corps.  Lew was a great friend and Annette is a grand lady whose devotion to the Corps and Lew’s memory made us all the richer for it.